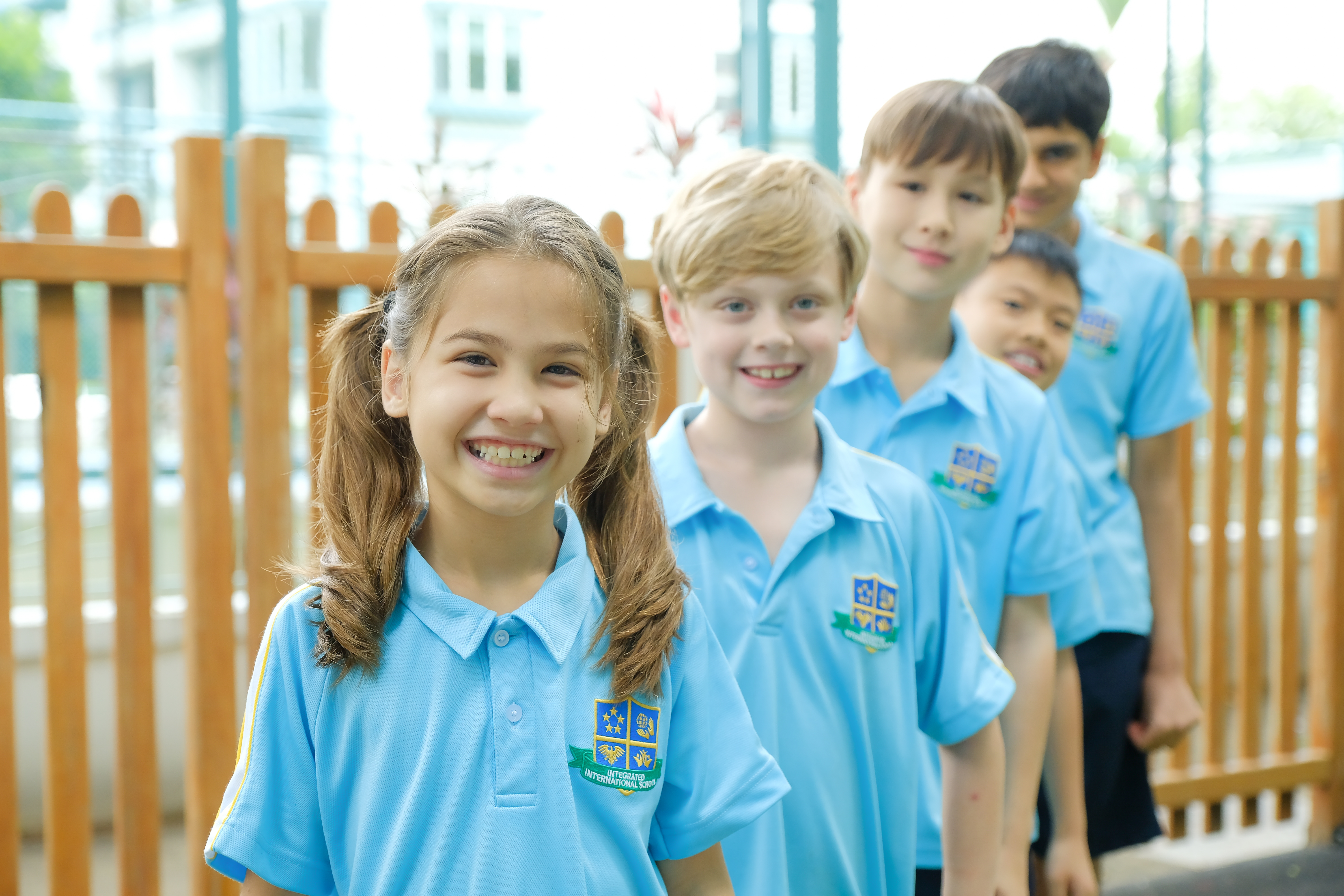 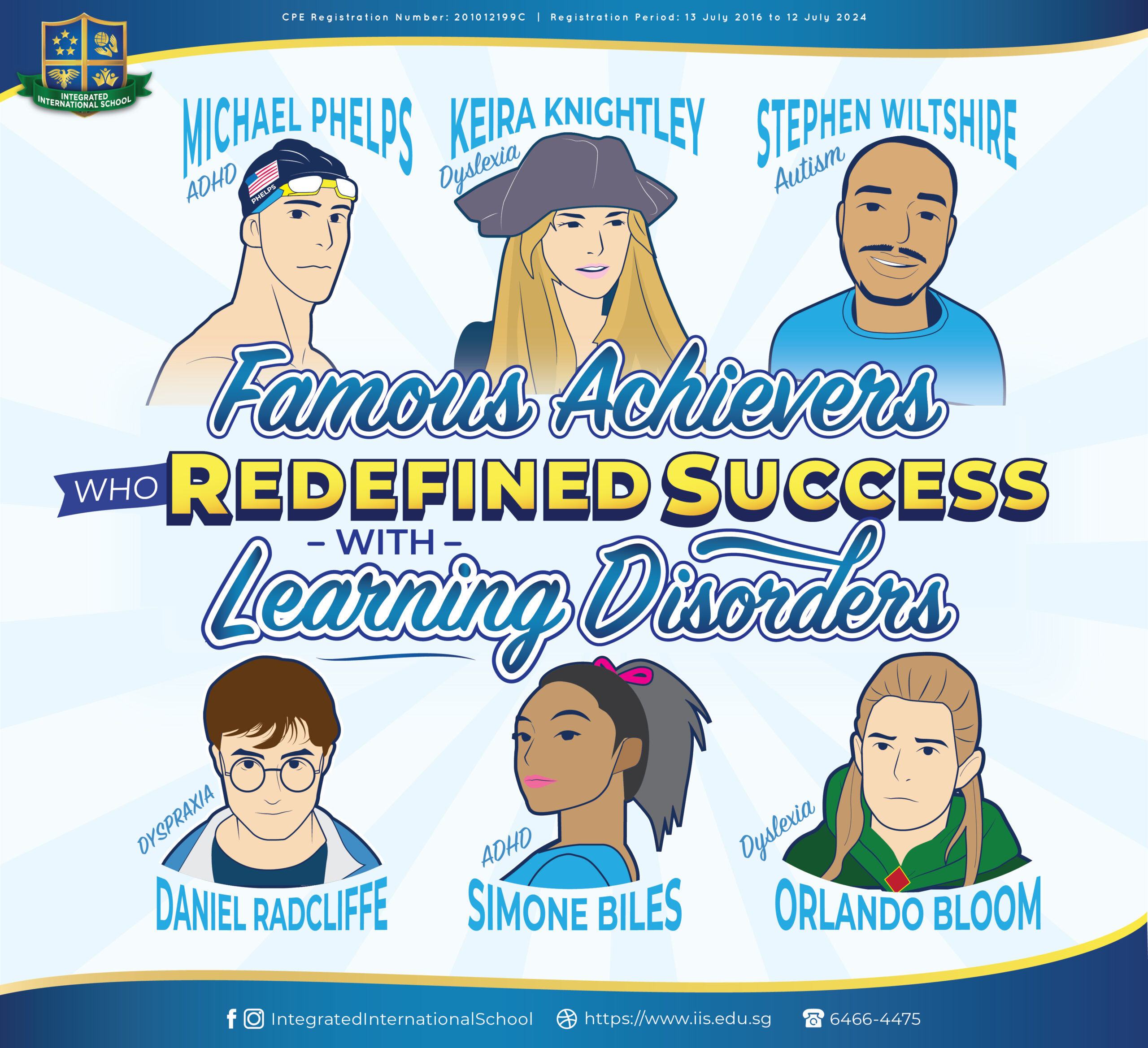 At the Integrated International School one of our core school values is “Redefining Success”. We believe that success spans across a wide spectrum of possibilities. We know that no two students are the same, and that no individual child has the same response to learning in every situation – and that’s a great thing. Our focus is to ensure our students aim to achieve the highest level of their own personal definition of success. Everyone goes through challenges and we’ve decided to compile a list of inspiring famous achievers who have certainly redefined success!

Michael Phelps [ADHD]
Known around the world as the most decorated Olympian of all time and former competitive swimmer, Michael Phelps started swimming shortly after he was diagnosed with Attention Deficit Hyperactivity Disorder (ADHD). “Growing up as a kid with ADHD, I was constantly bouncing off the wall,” Phelps shared in an interview with Benzinga. “I could never sit still. I had teachers telling me I could never amount to anything and that I would never be successful in life.” His confidence was lacking but with the support and encouragement from his parents, he tried swimming. By turning his boundless energy into a strict training regime, the sport helped him become one of the most accomplished athletes in history.

Keira Knightley [Dyslexia]
This Oscar-nominated actress has always risen to a challenge but struggled academically in her early school years. She was diagnosed with Dyslexia at the age of six and remembers never wanting to read books. But with her mother’s support and encouragement that she would be able to read, Knightley became determined to read every single day. In an interview with The Boston Globe, she said, “I drove myself into the ground trying to get over Dyslexia, and when I finished school, I had top grades.”

Stephen Wiltshire [Autism Spectrum Disorder]
One of the most successful and renowned artists in the U.K, Stephen Wiltshire was mute in his early years and at age three was diagnosed with Autism Spectrum Disorder (ASD). He felt he was unable to communicate his thoughts, feelings and therefore found drawing as a way of expressing himself. Wiltshire continues to practice self-expression through art and his commissions have an approximate six-to-eight month waiting list. His incredible memory for detail catapulted him into the spotlight after videos emerged of his large-scale cityscape drawings that he drew after a short helicopter ride over a New York City.

Daniel Radcliffe [Dyspraxia]
The famous face behind Harry Potter, Daniel Radcliffe, has had mild dyspraxia for his entire life but used the diagnosis as motivation to help him become the star in one of the most successful film franchises of all time. Radcliffe explained one of the reasons he became an actor was because he struggled in school and acting gave him the self-confidence he needed. He told an interviewer that he does still have trouble tying his shoelaces and jokingly asked why Velcro wasn’t more popular.

Simone Biles [ADHD]
The most successful American gymnast at just 23, Biles was diagnosed with Attention Deficit Hyperactivity Disorder (ADHD) at a young age and has been on medication ever since. Biles first discovered gymnastics at age 6 and began to pour all her energy into the sport. She has proudly stated, “Having ADHD, and taking medicine for it is nothing to be ashamed of, nothing that I’m afraid to let people know.” With a combined total of 30 Olympic and World Championship medals, she is the third most decorated gymnast of all time. It is clear that this incredible athlete still has plenty more success ahead of her.

Orlando Bloom [Dyslexia]
This British actor is best known for his leading role in Disney’s Pirates of the Caribbean and at age seven was diagnosed with Dyslexia. Although Bloom’s mother encouraged him to read, his struggles lead him to look for a creative outlet. During this search, he discovered his passion for drama. He learned that reading scripts were a big part of acting and therefore was persuaded to practice reading aloud. Bloom stated at the 2010 Adam Katz Memorial Lecture, “The gift of Dyslexia was that I learned everything forward and backward, inside out, so I was fully prepared. I had to learn everything so that I wouldn’t have stage fright, or the lines wouldn’t fall out of my mind.”