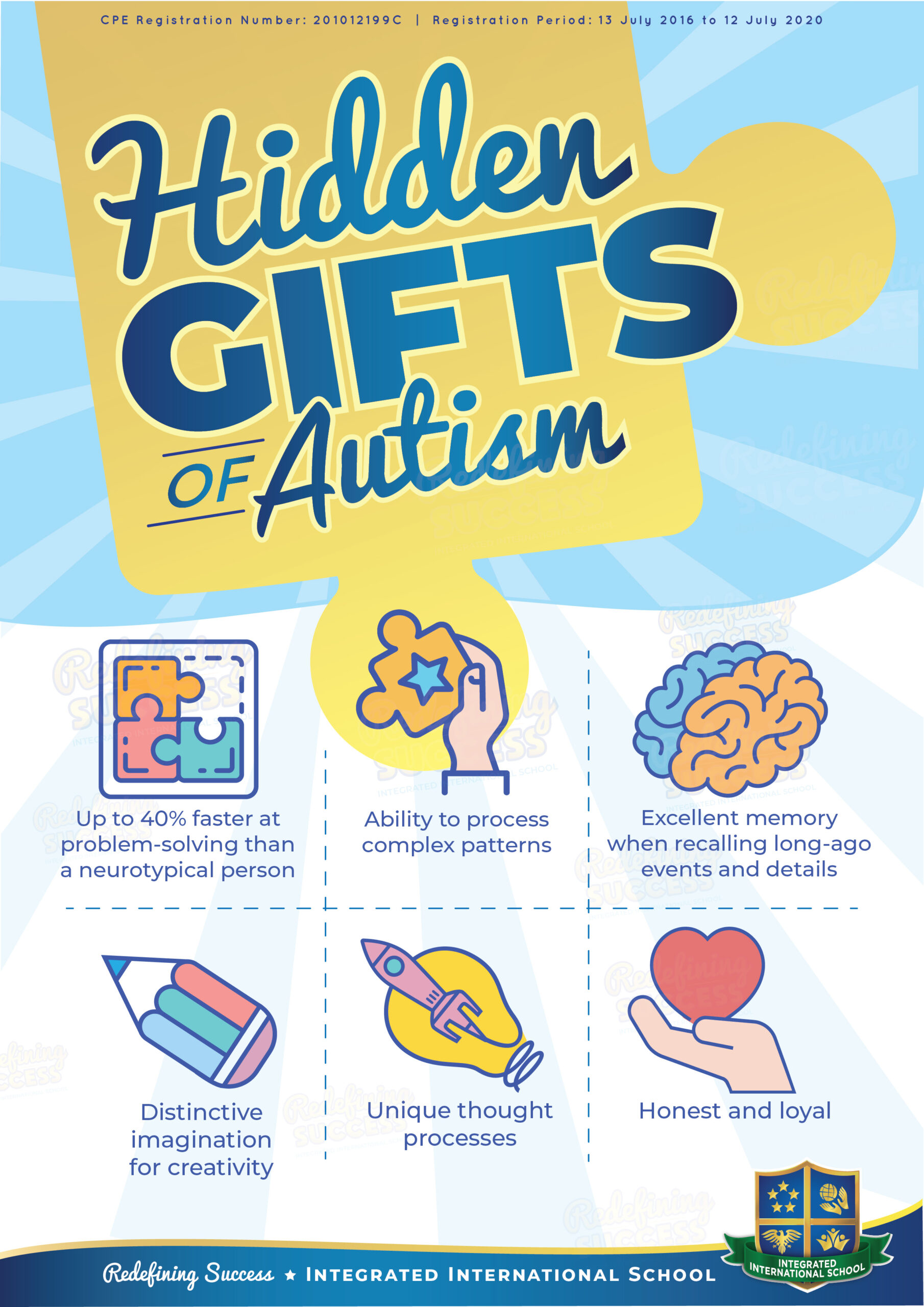 At the Integrated International School, we recognise that every person is different, and each have their own strengths. We embrace individuality and understand that learning is not a one-size fits all approach, and we love that uniqueness! IIS provides a learning environment where out-of-the-box thinking is encouraged and celebrated. For students who are on the autism spectrum (ASD), our special needs education specialists understand that an autistic mind is often complex and reveals the power of neurodiversity. There are so many positive traits often associated with those on the autism spectrum, including but not exclusive of:

Up to 40% faster at problem-solving than a neurotypical person

In 2009, a study by Harvard University and the University of Montreal had two separate groups of participants complete patterns in the Raven’s Standard Progressive Matrices (RSPM) – a tool that measures hypothesis-testing, problem-solving and learning skills. The group of autistic individuals overall performed much better and used perceptual regions of the brain to quickly solve the problems they were given.

Since the early days of autism research, scientist Dr. Leo Kanner, who was credited with identifying autism in the 1940s has stated that while over numerous studies, he often saw children with a “precise recollection of complex patterns and sequences.” He noted their ability to remain focused and notice even the tiniest of details when processing patterns.

Well-known artist and autistic savant, Stephen Wiltshire, enjoyed a helicopter ride over the city of Rome and after just 45 minutes, he went on to draw a large cityscape of Rome from memory and in incredible detail. There have been multiple studies to show how an autistic mind has an average working memory score almost three standard deviations above the average of a neurotypical person. Prominent examples have included twin sisters, Flo and Kay Lyman, who were able to recall every question and answer from their favourite TV quiz show and Daniel Tammet, who could speak 11 languages fluently! When it came to numbers, he achieved the world record for the most digits of PI remembered

From art to music and poetry to writing, the career path for an individual with autism shouldn’t be limited to a career that is logically focused (IT, data processing, mathematics). Researchers at the Universities of East Anglia and Stirling found that when a group of individuals with ASD were asked to come up with innovative uses for objects, they formed more unusual and creative ideas. Although they gave less suggestions than the group with no autistic individuals, their ideas were much more original and exhibited divergent thinking.

Every person thinks differently and processes things in their own way; this is especially true for those with ASD. A neurotypical person often utilizes a top-down thinking approach when solving problems. This means they look back on prior learning and memories to solve problems whereas an autistic mind is not as constrained and takes a bottom-up approach. They can find inventive solutions and process a greater extent of information.

We value honesty here at IIS and often see that our students with ASD are true to their feelings and don’t tend to have ever learned to lie or manipulate. They wear their hearts on their sleeves and are very loyal to those around them, these wonderful qualities are something to admire and emulate.

Take a look at our helpful learning disabilities infographic to better understand this behaviour, you can download it here.

Find out more about our dedicated Support Services by clicking here.